In 2014 I wanted a small, portable project that I could take along on an extended vacation. I had a copy of the Model Shipways plans by Ronnberg and his builders manual for the Benjamin W. Latham, an early 20th century mackerel seiner, built in 1902. The original vessel had been designed by Thomas F. McManus, a famous designer of American schooners from Boston, who had started out as a fish merchant but evolved into the premier designer of fast sailing fishing schooners. He revolutionized the design of the Glouster schooners by shortening and then eliminating the bowsprit and adding a long overhanging stern. His designs were not only fast, they were beautiful.

Speed was important for a fishing boat, as these ships tended to cluster around the schools of fish or the best fishing sites and once fully loaded, they make a frantic dash to the market, as the first boats to arrive got the best prices for their catch.

I converted the plans to my preferred 1:64 scale and built the hull with oak frames and oak planking. I took the hull along on our trip and finished the planking, sanded, and varnished it along the way.

The model then rested in a closet for a few years as I worked on other projects, but after I had completed the Constitution diorama, the Latham was next in line. I decided to incorporate this model also into a diorama showing it at work, catching and processing mackerel. That required a great deal of research into the anatomy of ships of that time, including the interesting rigging, a combination of metal wire rigging and hemp ropes. Also the details of the particular design aspects of a seiner which had a large seine boat, which always deployed on the starboard side. The captured fish were also retrieved on that side, but the seine net itself was retrieved and stowed on the port side, via a roller along the main rail. Most mackerel seiner schooners were larger than the Latham and carried the seine boat on deck when traveling to the fishing ground or back. The Latham was small at 84 feet length and could not carry the seine boat on deck, but towed it along side when traveling. The Latham had added a gasoline engine with a small propellor on the port side of the keel later in her career, but I omitted that detail, as I wanted to show her working under sail power alone.

I had to do a great deal of research to understand the process of mackerel seine fishing in the period of this model. Fortunately there was some information in the Model Shipways guide to building the model – the original guide from 1972 included some excellent photographs taken in the early 20th century. The current manual does not contain the photos. An internet search turned up additional photos of fishing schooners, seine boats, crew, and details of the ships and of the processing of the catch in the days before refrigeration. Also, I found on line a .pdf of a government survey of the mackerel fishing industry from late 1800s. This document included an inventory of vessels active in several of the fisheries over several years, including name and tonnage of the vessels. It also contained a detailed description of the fishing methods, both seine fishing and hook-line fishing, as well as description of the cleaning and stowing of the catch.

The crew activities depicted in the model are based on the description in the above report and photographs found on line and in the Model Shipways 1972 manual.

The seine net itself, was a purse seine, carried on deck and transferred over the seine roller on the after port side of the ship to the seine boat upon arrival at the fishery and retrieved the same way for the trip home. The seine roller is visible in some of the photos below.

The lookout at the mast head kept watch for signs of mackerel, which school in large numbers near the surface so create a visible surface disturbance. Once a likely catch was spotted, the crew of the seine boat (8 to 10 men) and two men in the dory, which helped the seine boat crew, deployed the seine around the school of fish.

Once the dory was stowed on deck, the ship then drew alongside the seine boat, which was secured to a towing boom on the starboard side of the ship. The side of the seine opposite the formerly open end had a rectangular extension, known as the bail, which was marked by red and white painted corks. The section was hauled on board the ship and secured to a board fastened to the bulwark on the starboard side as the men on the seine boat hauled the seine onboard that boat to progressively shrink the size of the seine as the catch was brought on board the ship for processing.

The first picture shows the seine boat alongside the mother ship being towed with the boom, the seine between the two vessels. The rectangular part of the seine has been hauled onto the larger ship and fastened into notches on a board along the bulwarks on that side, as the crew of the seine boat works to pull the netting onto the seine boat and reduce the size of the seine enabling the dipper to transfer the fish to the deck of the Latham. 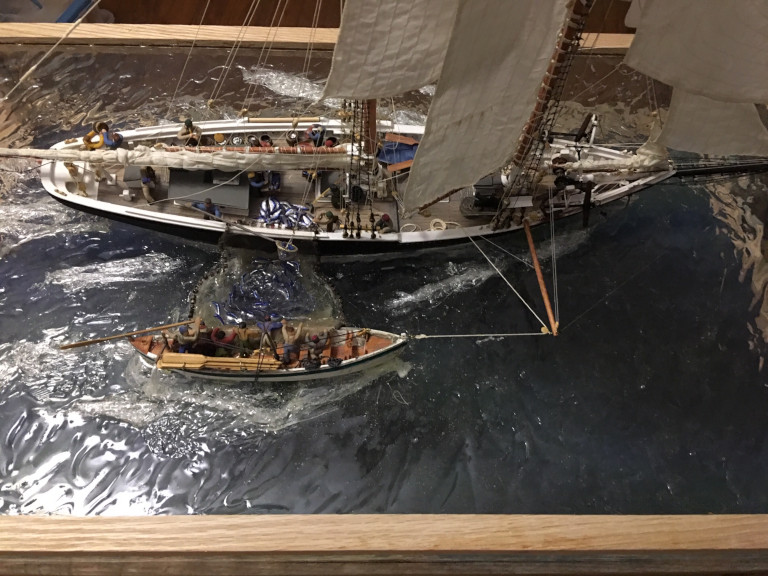 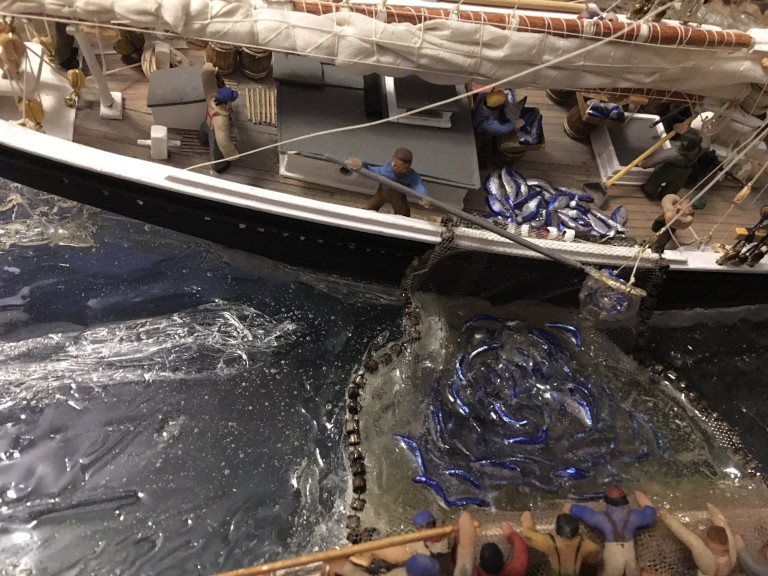 The seine was emptied using a large dip net, suspended from a dory tackle on the main cross tree, starboard side, and guided by a second crewman using its long handle. The mackerel were dipped out and the net emptied onto the deck in a mass of flopping fish and flying scales. 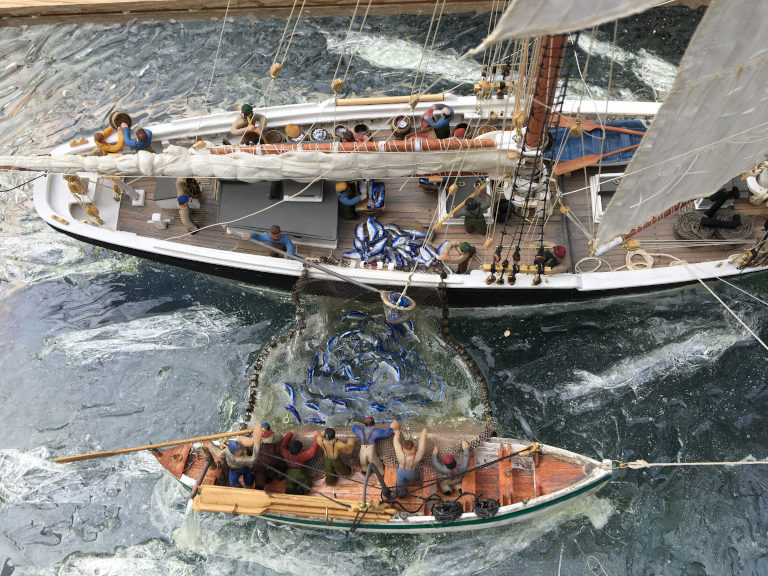 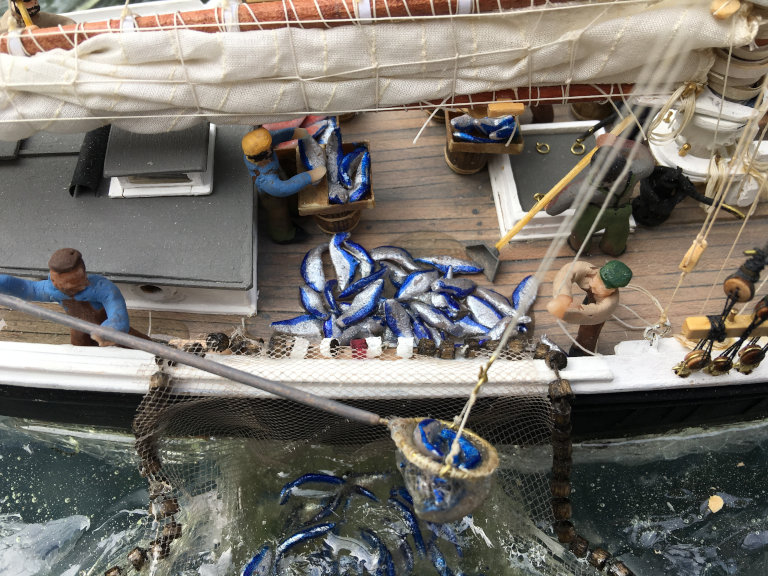 Once on deck, the mackerel were processed by being cleaned and salted down into barrels. The Keeler first opened the fish along the backbone and passed the fish to the Gibber, who removed the entrails before depositing the fish into a barrel of brine. The Keeler and Gibber generally worked over open boxes placed on barrels to make a working table, or placed the boxes onto the cabin roof. The boxes held the fish to be processed. A crewman shoveled or netted fish into the box of the keeler, who passed the opened fish to the box of the gibber. Sometimes salt was added to the gibber’s box or more often added when, after removal of entrails, the gibber put the fish into the barrel. 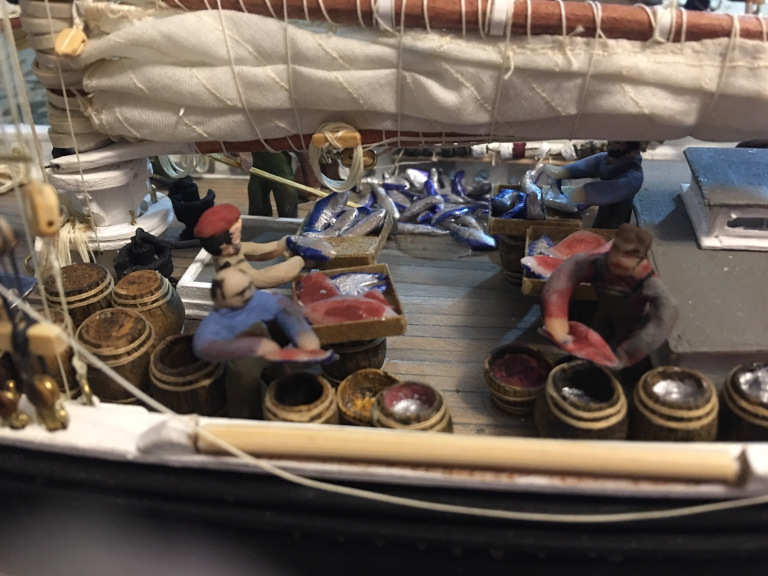 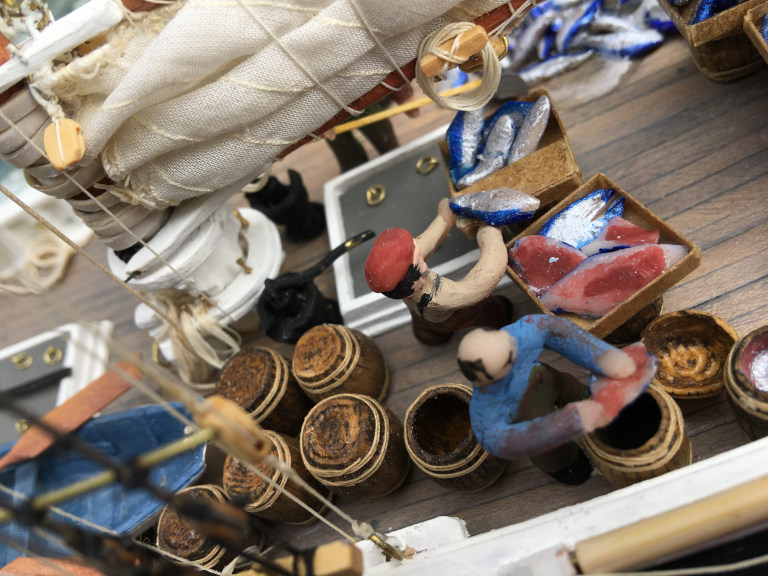 Once a barrel was full of fish, it was passed to the cooper, who placed a lid on the barrel and fastened it by driving the barrel hoops down to tighten the staves. The barrels usually had hoops made of saplings with ends twisted under and secured by a tap. There was also often a bung to permit opening the bunghole to add salt or brine.

Full barrels are standing around the deck, awaiting stowage below deck, along with some empties awaiting fish. 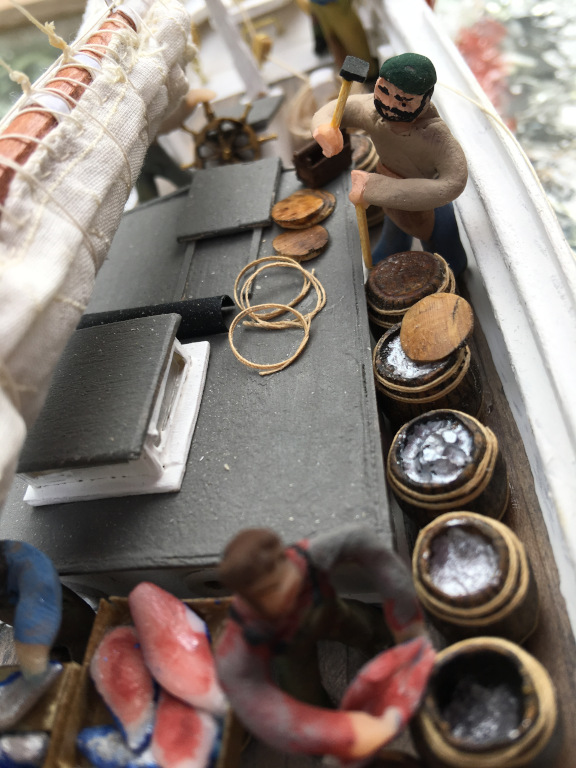 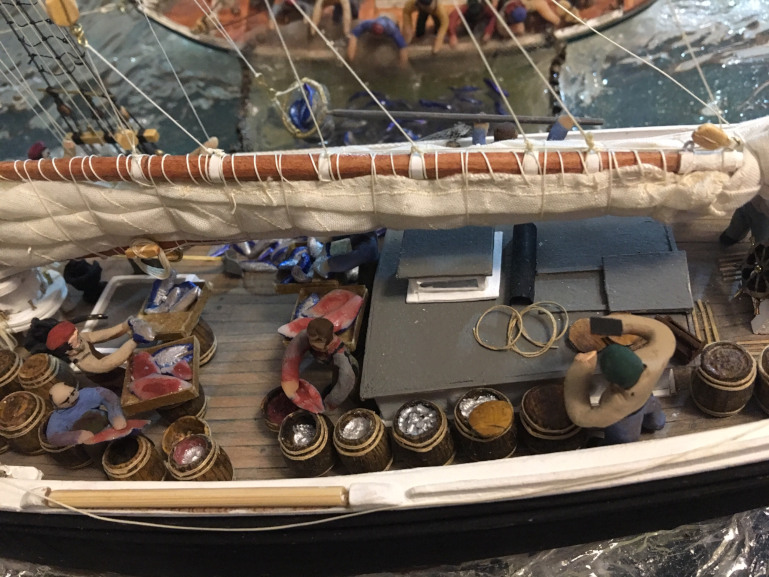 Filled barrels accumulated on deck and most were later transferred to the hold for the speedy voyage back home, but if the catch was large, the ship would return with barrels secured on deck. Depending on the size of the vessel and the size of the catch, hundreds to over a thousand barrels might be transported back. If a vessel was particularly fortunate, and the mackerel catch exceeded its capacity, the captain might fly a signal for other ships to lay alongside to share the catch, on shares, of course.

This model shows the ship with mainsail lowered and the main topsail clewed up. The “jumbo” jib is also furled. Foresail, foretopsail, inner and outer jibs, and the staysail are deployed. This configuration was suggested by several contemporary photographs of working vessels while processing the catch. I suspect the sails might not have been sheeted home but allowed to draw only partially, but ready for immediate use in the coming sprint back to the market.

In the diorama, the seine boat is towed on the starboard (leeward) boom as the seine crew continues to haul the net into the boat. The seine boat has a small log pump in the after cuddy so the master of the boat can pump/bail out the water taken on with the net. The boat master also uses the steering oar to maintain working distance from the ship. The other oars are stowed in a metal rack on the side of the boat, out of the way as the crew hauls in the net.

Aft, on the portside, opposite the side of the seine, two crew empty a barrel of entrails, attracting a couple of sharks. Early reports from the seine fisheries described dogfish attaching the mackerel in the nets tearing holes in the netting and allowing the mackerel to escape. Later, use of heavier cordage for the nets prevented the problem. I thought the crew might scatter chum away from the net to attract shark elsewhere. If you look closely at the lower picture, you might be able to see one of the sharks. 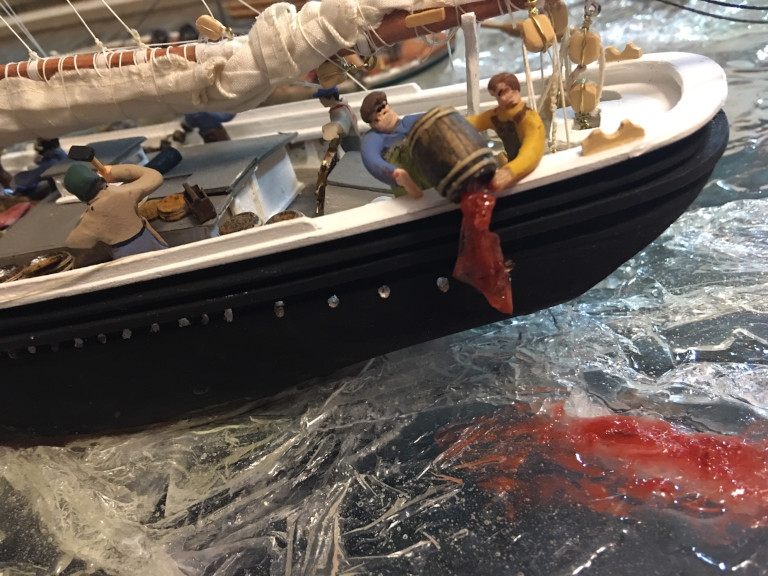 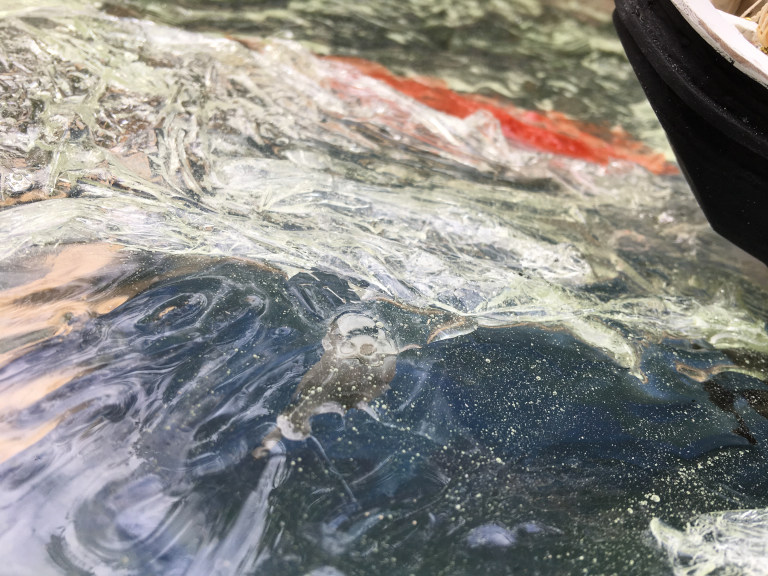 The case for the model is made of oak with acrylic glazing. The case separates at the waterline and the lower portion is also glazed with acrylic sheet with layers of tinted epoxy resin applied to the inside of the sides for a water effect and to the top surface of the top of the lower case to model the sea. This sheet is cut out for the ship and the seine boat, which are cemented in place. The bottom of the lower case is plywood, painted a dark green with flat acrylic paint, which is then mottled with blues and black. The light entering the sides of the case is blued by the tinted epoxy on the sides so the color of the bottom, the deeper water, is a satisfactory teal color, modified by the light patterns through the distortion of the epoxy patterns.

The water surface is multiple layers of epoxy resin. I used a rapid setting resin and stirred it vigorously to entrain some air bubbles, added some tints, and stirred the surface as the resin cured to create wave patterns. The waves along the hull and the wakes were modeled using clear plastic wrap in the resin. 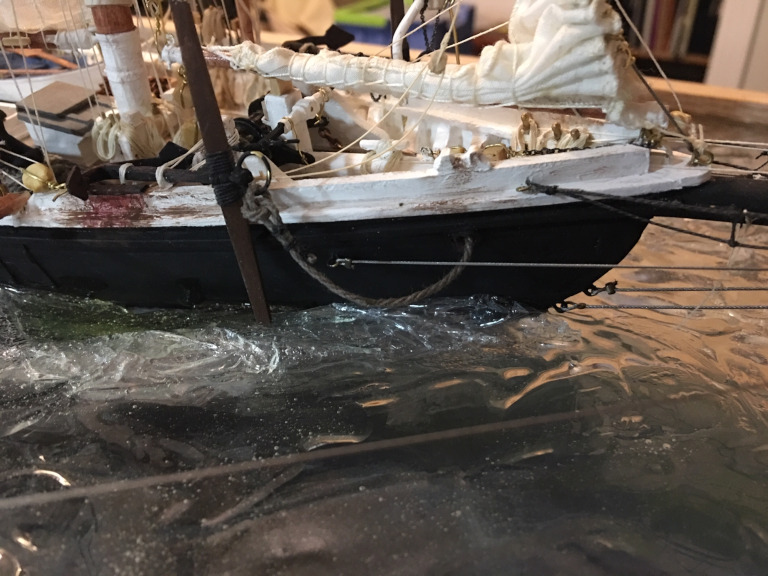 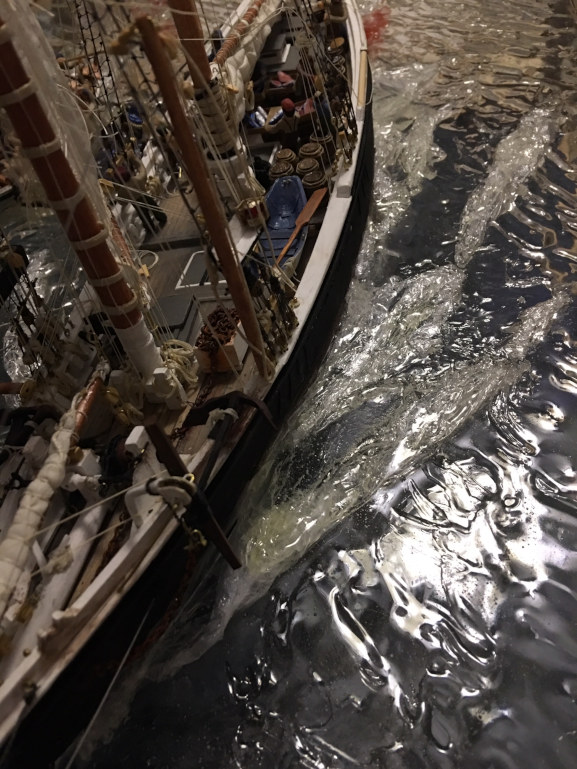 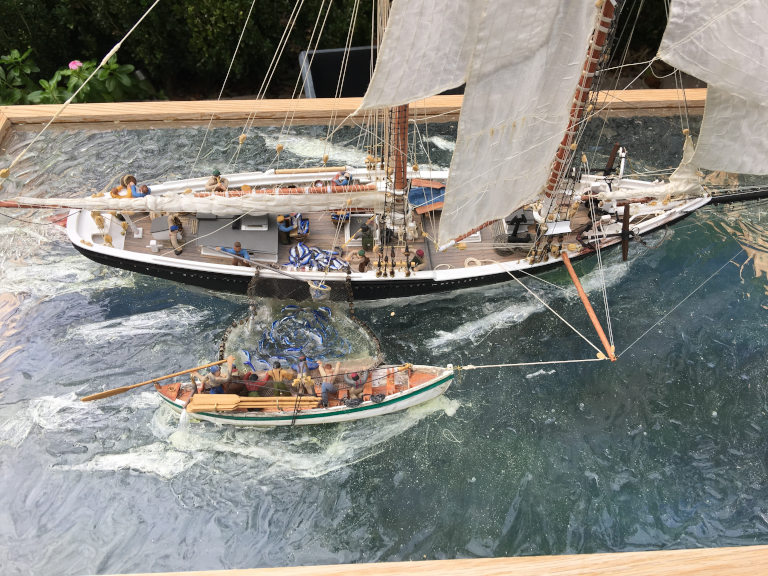 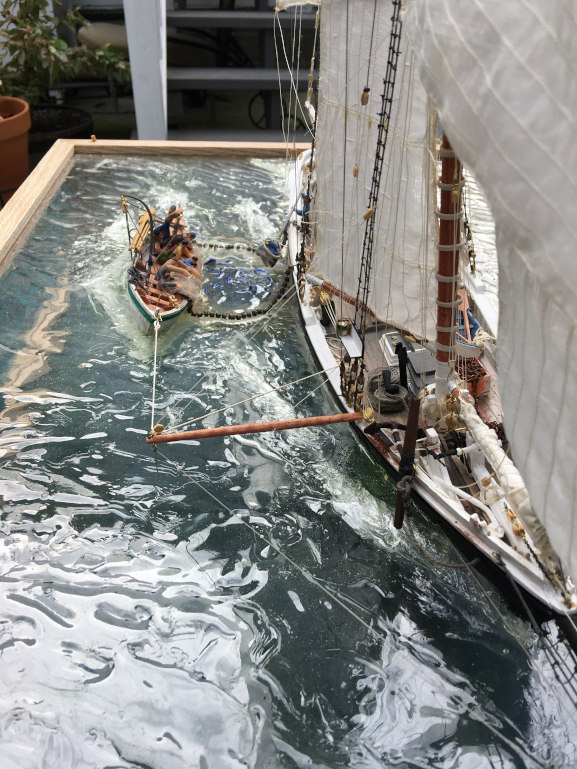 Here are some additional detail shots of the vessel. I did a little bit of weathering of the paint, and added some dirt and rust to make it look like a working boat. 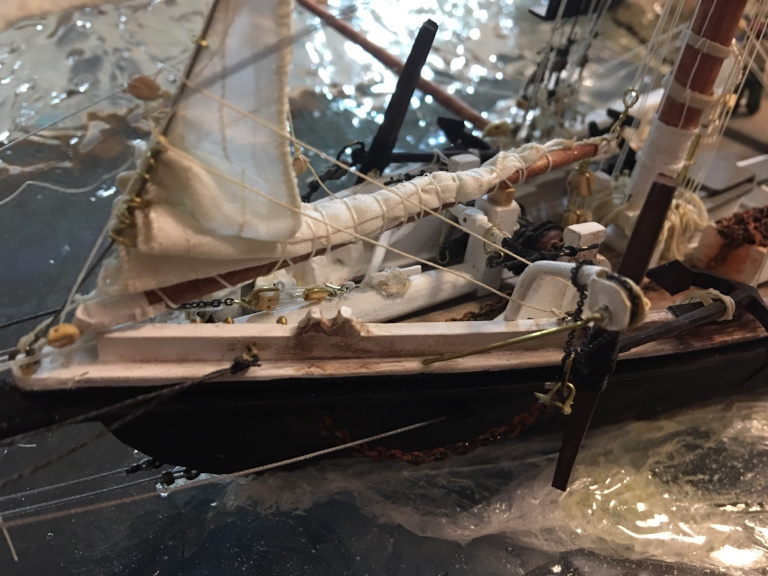 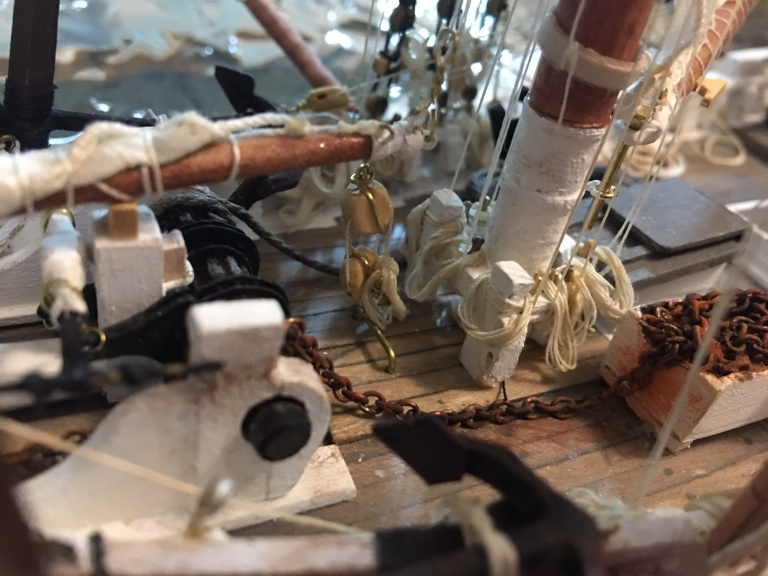 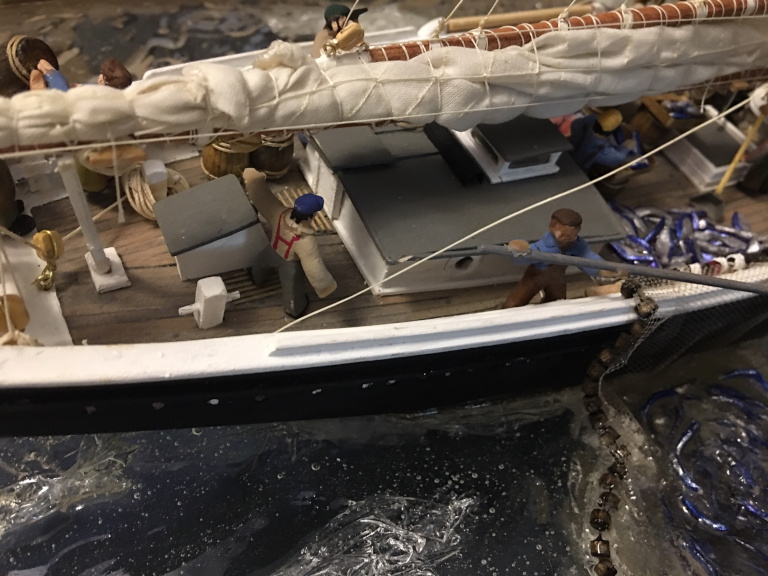 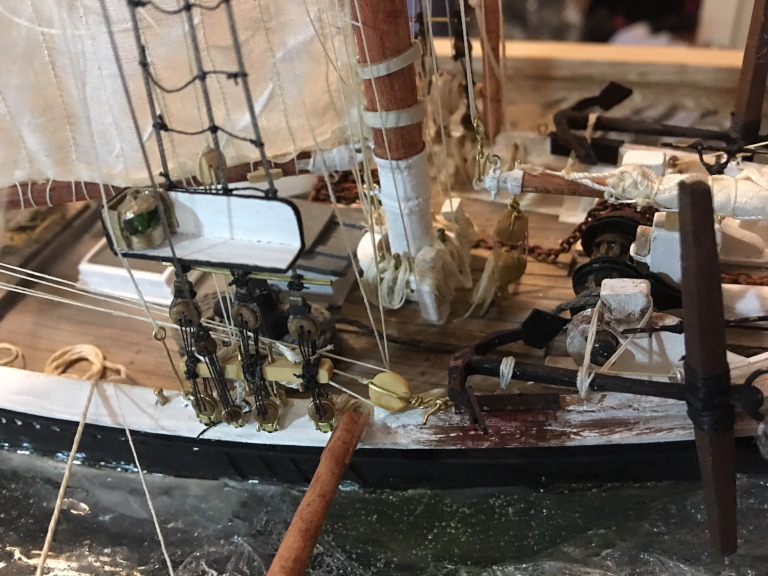 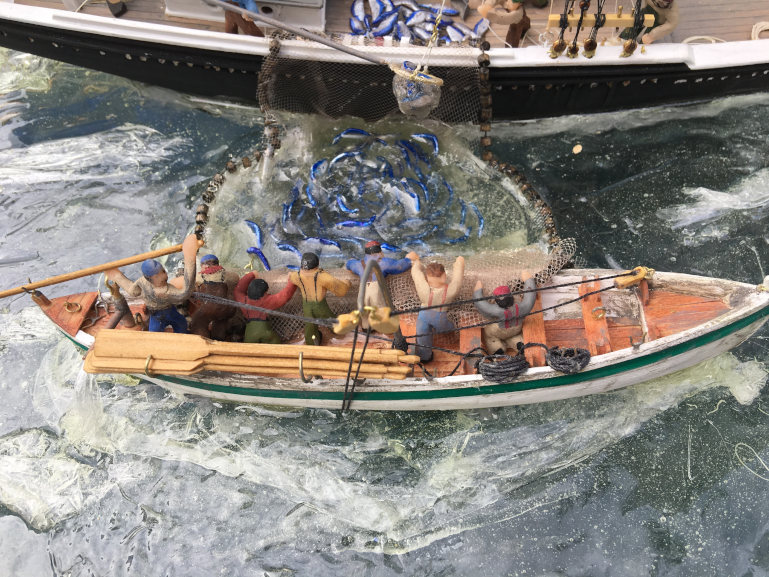 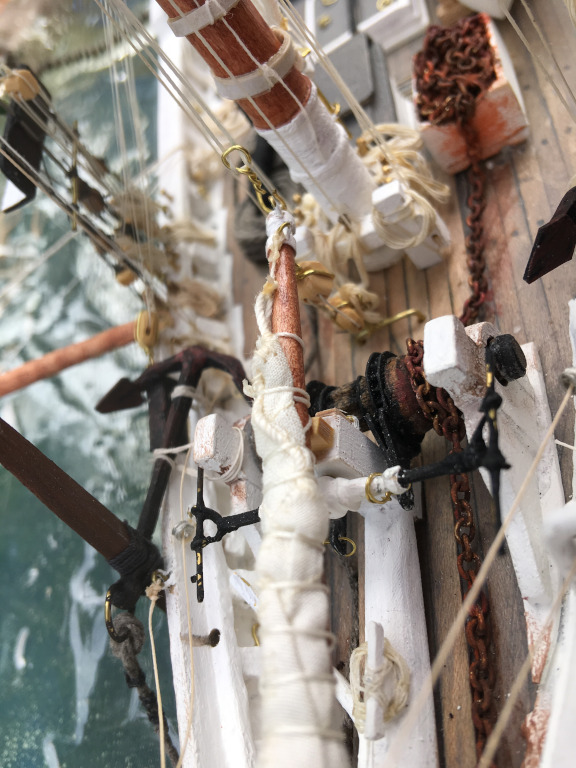 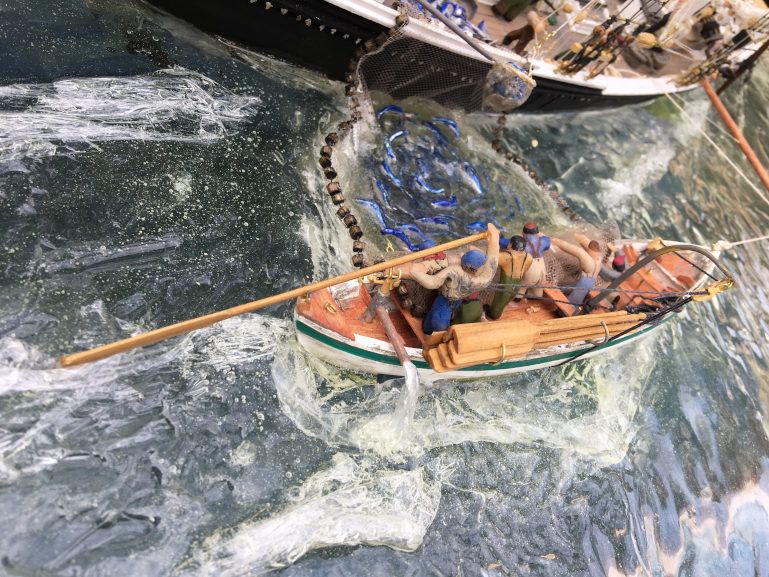 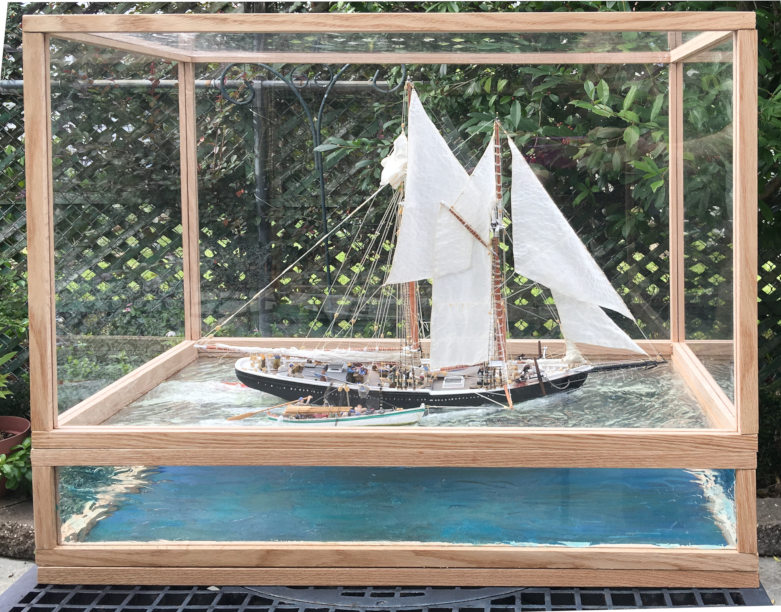 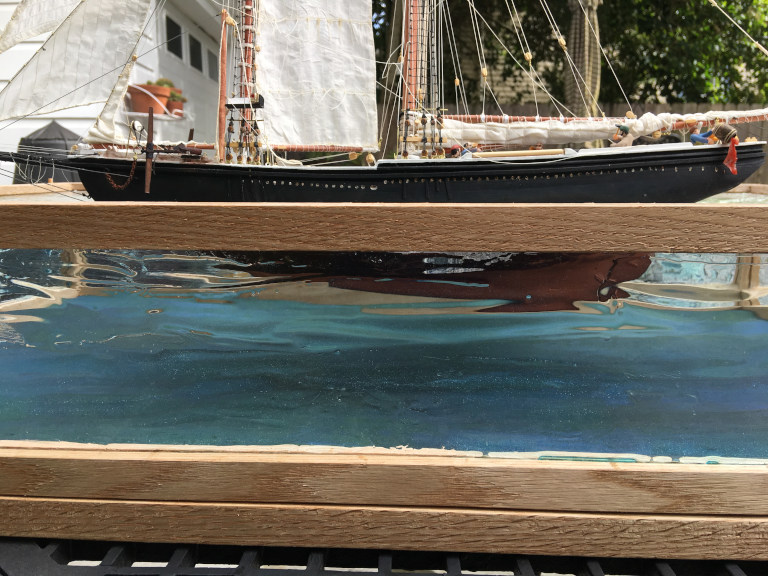